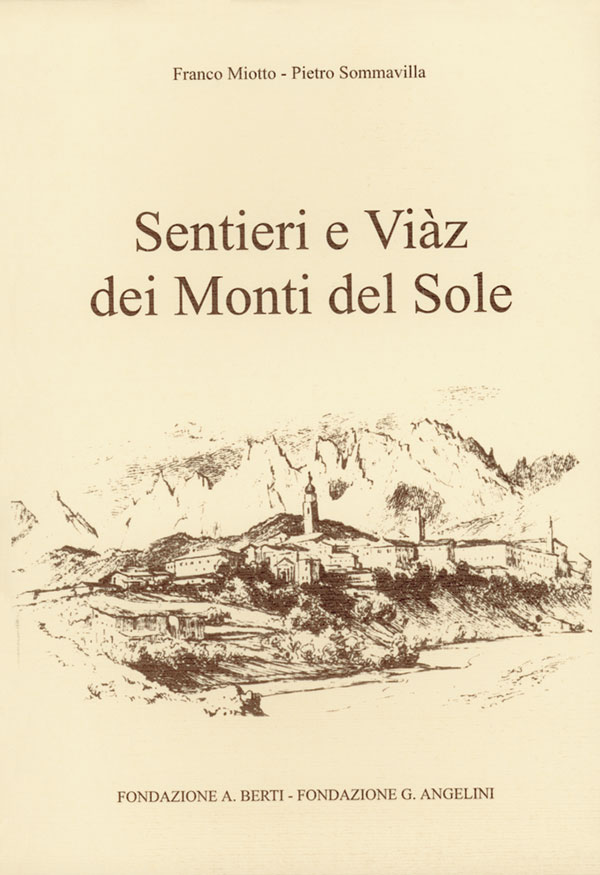 This book is a monograph authored by Franco Miotto and Pietro Sommavilla, dedicated to the trails and “viàz” of the Monti del Sole, collected and adapted from texts published in a series with the same title between January 1991 and January 1993.

This monograph, thanks to the collaboration between the Angelini Foundation, the Antonio Berti Foundation, and the journal, Le Alpi Venete, which made available each organization’s litho-photos, cannot be considered a mere extract of the texts of each issue in the series. Since their original publication in the series, the authors have variously modified and updated the itineraries, integrating them with an introduction which furnishes important information on the natural environment. This includes an interesting note from the authors which clarifies the significance of the place names given in the local dialect, a note by Cesare Lasén, Director of the Parco Nazionale delle Dolomiti Bellunesi, on the vegetative landscape, and a contribution by Michele Cassol on the fauna of the area. The result is a true guidebook for mountaineers and scramblers with an interest in this small yet wild and fascinating Dolomitic mountain group. The book is extremely useful given the inaccessibility of the itineraries, and difficulty presented by the harsh terrain and severe environment of this group for those who do not hold particular knowledge of the area.

The addition of a list of place names with reference to the book’s text, not to mention the numerous illustrations and maps, are useful for consultation of the guide.

With this volume’s publication, a precious body of knowledge is made available, inspired by the best traditions of those explorers who came to know these mountains in the past. The result is a work which is not straightforward to categorize in any particular genre, dedicated to the Bellunese Dolomites to which the authors have dedicated so much physical effort.